According to KWLEN, the ‘Police Officer of the Year’ award is presented to an officer dedicated to bettering citizens’ lives in the communities in which they serve and demonstrates extraordinary valor, investigative work, and community policing efforts. Detective Strong was the 2021 recipient of this award.

Detective Strong is assigned to the KSP Electronic Crime Branch with the Internet Crimes Against Children Task Force (ICAC) and is a six-year veteran of the agency. Detective Strong quickly recognized the need for additional tools to assist her investigative team when searching for electronic devices. She took steps to obtain Kentucky’s first Electronic Storage Device (ESD) canine.

Detective Strong and her canine “May” graduated from the ESD training program in March 2021. Since then, they have completed 14 search warrants, rescued nine child victims, and participated in six school visits and community events. Captain Jennifer Sandlin says Strong takes action to make KSP a leader in law enforcement and is proud of the work she’s accomplished.

“Through Detective Strong’s ability to recognize a need for an ESD Detection canine, and her initiative to research and request it, she has expanded the ability of the ICAC Task Force to locate evidence, save children, and prosecute offenders,” said Sandlin.

According to KWLEN, the ‘Member of the Year’ award is presented to an individual who advances public awareness of KWLEN and demonstrates a significant level of commitment to the organization. Detective Rugina Lunce was the 2021 recipient of this award.

Lunce is assigned to the Drug Enforcement and Special Investigations Unit and is a 21-year veteran of KSP. In 2018, Lunce was named the agency’s human trafficking state coordinator. She also serves as chairperson of the Kentucky Law Enforcement Human Trafficking Investigators Association.

Her commander says she is highly dedicated to her job, often taking phone calls late at night, on weekends, and holidays to help victims of human trafficking.

“I cannot think of a more deserving person to be recognized for this honor,” said Captain Roger Short. “Detective Lunce has a passion for her work and has been instrumental in coordinating multiple, high profile human trafficking sting investigations.”

One of those investigations received national recognition and was announced by KSP in Sept. Operation United Front, a multistate human trafficking sting carried out Aug. 26 by 29 agencies across Kentucky – rescued 21 victims, including two minors, and yielded 46 arrests. The 12-state human trafficking operation, led by the Missouri Attorney General’s Office and Missouri Highway Patrol, is believed to be the first multistate operation of its kind.

This year, the number one priority for KSP is creating a better Kentucky by making the commonwealth’s streets safer, communities stronger and the nation more secure by providing exceptional law enforcement made up of a diverse workforce. For more information about career opportunities with KSP visit their website.

To learn more about KWLEN and its mission, visit the organization’s website. 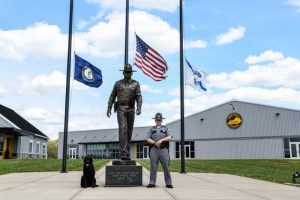