Campbellsburg, Ky (April 25th, 2018) – Kentucky State Police Post 5 is investigating a commercial vehicle collision that resulted in the death of one individual and the injury of two others, including a Kentucky State Trooper. 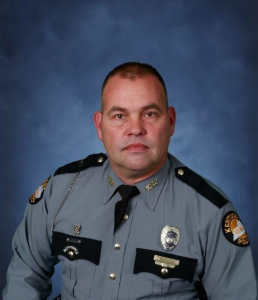 Just prior to 7:30 a.m. Kentucky State Trooper Mickey Gonterman responded to a call of dogs in the roadway at the 30 mile marker on I-71 South.  Trooper Gonterman and the caller were walking along the right hand shoulder of a bridge when a vehicle that had moved into the left lane rapidly decelerated.  A box truck and a tractor trailer that were also in the left lane moved into the right lane to avoid contact with the passenger car.  The tractor trailer then struck the box truck in the rear causing the box truck to “jack knife” across both lanes of traffic and overturn on the bridge.  The caller and Trooper Gonterman were struck by the trailer of the box truck, pinning the caller, and causing Trooper Gonterman to fall approximately 30 feet from the bridge.

The caller was pronounced deceased at the scene by the Henry County Coroner.  Trooper Gonterman was flown to the University of Louisville Hospital where he is listed in critical condition.  The driver of the box truck was transported to Baptist Health Hospital in LaGrange for non-life threatening injuries.