FRANKFORT, Ky. (June 22, 2018) — The Kentucky State Police Academy presented diplomas to 42 new troopers at ceremonies held in Frankfort today. Their addition to the force brings the agency’s strength to a total of 874 troopers serving the citizens of the Commonwealth.

Lt. Gov Jenean Hampton told the new troopers that they were coming on board during a time when the need for them was greater than ever. “Gov. Bevin and I are very grateful that you have chosen to serve,” she said, “and the people of the Commonwealth of Kentucky have tremendous respect for what you do. God bless all of you and the family members that support you.”

The new troopers are part of the agency’s 96th cadet class. They reported for training on Jan. 7, 2018 in a class that consisted of 75 cadets. Thirty-three resigned during the program. 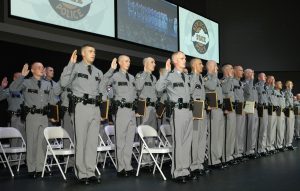 Harper also received the Ernie Bivens Award, an honor presented to the cadet who, in the opinion of the KSP Academy staff supported by input from the cadets themselves, shows distinction as a class leader, strives for academic excellence and has excelled in all phases of the academy’s physical and vocational training.

John Holt, of Nebo, Ky., received the Commissioner’s Commitment to Excellence Award, which is presented to cadets who demonstrate leadership, the desire to get the job done and the determination to be the best every day. 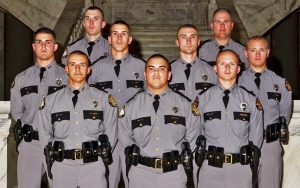 Nine cadets earned Associate’s Degrees in General Occupational and Technical Studies from the Bluegrass Community and Technical College during the training. They include:

Shakori Needham, of London and

“These cadets are the first to benefit from new hiring guidelines established by the legislature in 2017,” notes KSP Commissioner Rick Sanders. “Previously, applicants were required to have 60 hours of college credit, two years of active duty military experience or two years of certified police officer experience. Now, anyone who possesses a high school diploma or GED and has three years of full-time work experience can apply for employment as a Kentucky State Trooper and earn an associate’s degree during the training process.”

The following is a list of the new troopers, their duty assignments and their hometowns or residences:

Each new trooper will be supervised by a training officer for eight weeks after reporting to their post assignments.

KSP is now accepting applications for a cadet class tentatively scheduled to begin in April of 2019. For more information, visit the Kentucky State Police Recruitment website at http://kentuckystatepolice.org/recruitment/ . Applicants may also call the Recruitment office toll-free at 1-866-360-3165 during office hours from 8 a.m. to 4:30 p.m. (ET) Monday through Friday or leave a message any other time.

All application materials must be completed and returned to the Kentucky State Police Recruitment Branch by Thursday, August 23, 2018.