The Angel Initiative encourages individuals with a substance use disorder to visit a local KSP post for assistance with treatment. 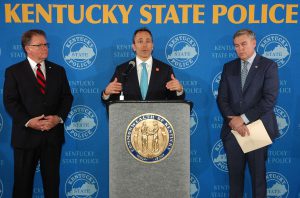 The program encourages individuals seeking addiction treatment to visit a KSP post, where he or she will be paired with a local officer who will assist with locating an appropriate treatment program. It is completely voluntary, and the individual will not be arrested or charged with any violations if he or she agrees to participate in treatment. The program will be operated in conjunction with Gov. Bevin’s “Don’t Let Them Die” campaign, aimed at raising awareness of the opioid epidemic and offering treatment resources to fight addiction.

“The Angel Initiative is a valuable tool in our fight against the opioid epidemic and the scourge of drug addiction impacting our communities,” said Gov. Bevin. “The strategic geographic locations of our 16 KSP posts will allow ready access for individuals across the Commonwealth who are seeking help. Breaking the cycle of addiction will require increased efforts by many, and innovative public-private collaborations like the Angel Initiative have the power to transform the lives of Kentuckians and communities we live in.”

KSP Commissioner Rick Sanders called the initiative a forward-thinking and open-door approach for those combating addiction, stating, “KSP is acutely aware of the breadth and reach of the drug problem throughout the state. Our troopers, as well as local law enforcement officials, see firsthand the devastation addiction causes for families. That’s why our agency is committed to face this scourge head on.”

Lethal overdoses claimed more than 1,400 lives in Kentucky in 2016, a 7.4 percent increase from the prior year. Fentanyl, a synthetic opioid that is up to 50 times more potent than heroin, was a factor in 623 deaths, while heroin contributed to 456 deaths.

Kentucky Justice Cabinet Secretary John Tilley praised KSP for this innovative program. “Substance abuse has been overwhelming our criminal justice system since the 1970s, and after four decades of strife, it’s time to find pragmatic solutions that produce better results,” Secretary Tilley said. “The Angel Initiative will connect those suffering from addiction with a safe place to come for assistance without fearing retribution.”

In 2017, KSP designated posts in Pikeville and Richmond to serve as pilot projects for the Angel Initiative. Local KSP captains in those areas built partnerships with treatment and medical programs, faith-based initiatives and federal, state and local law enforcement.

“It is not always an easy task to gather leaders from numerous agencies, all with different missions, at one table,” said KSP Captain Jennifer Sandlin. “But the need was urgent as all of the agencies were witnessing the  impact of addiction in the local community. What we found is that we were able to do much more when we pooled all of our resources together.”

Commissioner Sanders says launching the Angel Initiative on a statewide scale will not be without its challenges.

“People have to learn to trust the program and understand that they are not under threat of arrest as long as they seek help by voluntarily turning themselves in at a KSP post,” Sanders said. “However, if a person is pulled over or otherwise apprehended by state police and is found to be under the influence of, or in possession of drugs, they will be arrested.”

Sanders says the initiative is not a free pass to drug dealers and traffickers.

“This is not being soft on crime — it’s being smart on crime,” said Sanders. “KSP is as dedicated as ever to pursuing and stopping drug dealers. When those suffering from addiction are released from prison without any treatment, our prisons become revolving doors. If our communities are ever to be free of the cycle of addiction, treatment is necessary.”

“We can’t arrest our way out of this problem,” he added. “We want to provide help to citizens battling addiction.”

After spending more than 24 years working for the U.S. Drug Enforcement Agency (DEA), Sanders firmly believes the Angel Initiative is a more effective approach to battling drugs in our communities.

“Our posts have helped people who enter our doors since 1948. That has never changed,” Sanders said. “With the Angel Initiative we now have a predetermined response with a focused mission that will help those suffering from addiction when they need it most.”