KSP, along with officials from KYTC, will re-open the Morehead Weigh Station 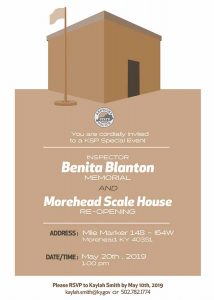 WHAT: KSP, along with officials from KYTC, will re-open the Morehead Weigh Station (featuring enhanced technology) and host a Memorial Dedication to CVE Inspector Benita Blanton, who died in 2016 while on duty.

WHY: The weigh station redesign with enhanced technology* will increase highway safety. Inspector Blanton was assigned to this facility and a permanent memorial honoring her will be unveiled in conjunction with the grand re-opening ceremony.

*Tour of facility and demonstration of new technology will be available for media.