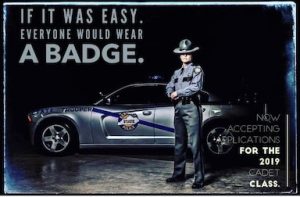 Commercial Vehicle Enforcement Inspector Travis Smith took the photograph titled If It Was Easy, using special lighting for the dark effect. The photo was placed on various social media platforms – shares, likes, and engagement were monitored to determine the effectiveness. On Facebook alone, the photo reached 43,600 people. The photo generated interest and conversation and, in doing so, achieved the desired outcome of increasing calls into the Recruitment Branch by candidates asking how they could become a trooper.

For nearly 12 years, KSP has provided a safe, fun alternative to traditional “trick or treating.” TheKSP Safe Trick or Treat event serves as an outreach tool for the agency and is an effective example of positive community engagement. Any opportunity for citizens, especially children, to see troopers and officers in a different role, helps to humanize the badge and develop stronger relationships with the community they serve.

The Trooper Teddy Project came to life in December of 1989 after Kentucky First Lady Martha Wilkinson hosted a gala fundraiser at Red Mile Racecourse earlier that summer. The concept of the program was for troopers to provide stuffed animals to children during traumatic experiences, such as a car crash or child abuse cases, and also to distribute to terminally ill children. The program does not utilize state tax dollars and is fully sustained through donations and individual sales (of the teddy bears) by the public. This project has also won the International Community Service Award. KSP will receive that award at the 2019 AAMVA Annual International Conference, August 20-22 in Omaha, Nebraska.

AAMVA’s awards foster a tradition of excellence in the motor vehicle and law enforcement community. The awards allow AAMVA to honor individuals, teams, and organizations who have committed their time and resources to safety initiatives, outstanding customer service, and PACE programs throughout North America.

*If you would like to help sustain the Trooper Teddy Project please visithttps://kentuckystatepolice.org/trooper-teddy/ or call KSP Public Affairs Branch at 502-782-1780*