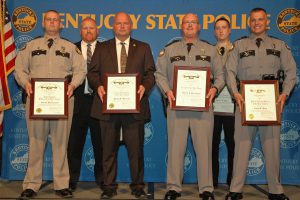 “You are the embodiment of what law enforcement does,” Hampton told those being recognized. “You stand between us and chaos. You protect those you don’t even know and you do it without asking. God bless you and your families and I pray that your end of watch comes on a day and time of your choosing.”

“Kentucky is blessed to have so many selfless, courageous professionals among the ranks of KSP,” said Secretary Tilley. “These award recipients have shown incredible strength and commitment to the safety of others – often at great personal risk – and we are honored to have them serve our commonwealth.”

KSP Commissioner Rick Sanders echoed the praise and said he was never surprised by the way the agency “answers the call.”

“The bell never rings without our men and women rising to the occasion,” he said. “I thank every member of the Kentucky State Police for their service and I thank their family members for allowing them to keep our commonwealth safe.”

Trooper First Class Scottie Pennington, a Berea, Ky. resident, was named 2017 Trooper of the Year. A 15-and-a half-year veteran of the Kentucky State Police, he is assigned to KSP Post 11 in London. He is the son of Linda Murphy of Berea and Jerry Pennington of McKee.

Detective Elisha Morris, a Georgetown, Ky. resident, was named 2017 Detective of the Year. A 14-year veteran of the Kentucky State Police, he is assigned to the agency’s Drug Enforcement & Special Investigations Branch.

Master Trooper Corey King, a Utica, Ky. resident, was named 2017 Public Affairs Officer of the Year. An 18-year veteran of the Kentucky State Police, he is assigned to KSP Post 16 in Henderson. He is the son of Gary and Marilyn King of Fancy Farm.

Jeffery Scott Steward, an Owensboro, Ky. resident, was named 2017 Arson Investigator of the Year. A four-year veteran of the Kentucky State Police, he is assigned to KSP Post 2 in Madisonville. He is the son of the late Gary Steward of Morganfield and Phyllis Warren of Bowling Green.

Officer Trenton Miller, a resident of Lawrenceburg, Ky., was named 2017 Facilities Security Officer of the Year. A seven-year veteran of the agency, he is the son of Allen and Shauna Miller of Elizabethtown.

Ten troopers were awarded the KSP Citation for Bravery, an honor bestowed on officers of the agency who perform acts of bravery, without regard for personal risk despite clear and obvious peril, and clearly above and beyond the call or risk of ordinary duty.

Two troopers were awarded the Citation for Meritorious Service with “V” Device for Valor, bestowed on officers of the agency who distinguish themselves by an act of courage performed under more than ordinary circumstances.

Two troopers received the Guthrie Crowe Award, which is named for the first commissioner of the Kentucky State Police and bestowed upon officers of the agency who sustain a severe wound or injury while in the performance of duty.

Twenty troopers were named Detective of the Year at the post, branch or division level.

Eighteen troopers were named Trooper of the Year at the post, branch or division level.

Six Commercial Vehicle Enforcement officers were named Officer of the Year at the regional level.

One trooper received a Commissioner’s Commendation, which is bestowed upon agency officers for an act of gallantry, meritorious achievement or exemplary service of such distinction as to have brought great credit upon the officer and the agency.

those who performed an extraordinary act of service or heroism in direct support of an officer of the agency engaged in the official performance of duty.

For a listing of the troopers, officers and individuals who received these awards click here.