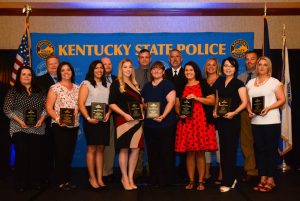 LEXINGTON, Ky. (July 19, 2019) – Kentucky State Police honored fourteen civilian employees today at a ceremony in Lexington. These award winners have exceled in public service and dedication to the agency this past year.

KSP Commissioner Rick Sanders spoke prior to the ceremony thanking the winners for their dedicated service.

“We know that every one of our civilian employees is a Godsend to this agency,” said Sanders. “When the hot calls come in from the public these folks are there to answer the call – whether it be from dispatch, the garage, the crime lab or any of our administrative offices.”

LaGrange resident Kevin R. Woosley was named 2019 ‘KSP Civilian of the Year’. An 18-year veteran of the agency, Woosley is an Internal Policy Analyst III at KSP Headquarters in Frankfort.

Beginning at Post 5 Campbellsburg as a Telecommunicator, Woosley has dedicated his life to public service. Serving the Commonwealth of Kentucky for 25 years, Woosley’s main goal has always been to help others. In 2001, Woosley began his career at Kentucky State Police as a Telecommunicator, since then he has grown in the agency from Post 5 – Communicators Supervisor to his current role as 9-1-1 Business Manager, stationed at Headquarters. Raised in LaGrange, Woosley is a 1989 graduate of Oldham County High School.