ARLINGTON, Ky. (April 22, 2017) – The Kentucky State Police is currently searching for a missing adult with a reported developmental disability. 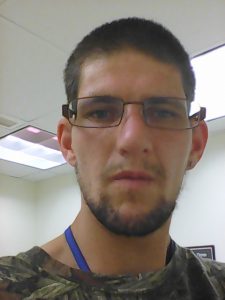 Dustin Lee Redmon is a 30 year old white male, 6’00” tall, weighing approximately 155 lbs, with blue eyes, short brown hair, and a goatee. He was last seen wearing blue jeans, a black long sleeve pullover, and tennis shoes. Redmon wears glasses, but did not have them on when he was last seen. He also sometimes wears a diamond stud earring in his left ear lobe.

Redmon sometimes drives a black Yamaha Vino scooter. The scooter has grey reflective tape on it, a yellow “Don’t Tread on Me” sticker, and is missing its left mirror. However, it is unknown if Redmon currently has his scooter with him.

Anyone who sees Redmon is asked to immediately call 911 and not approach him, because he has fled from authorities in the past.

The investigation is continuing by Trooper Adam Jones. Anyone with information is asked to contact the Kentucky State Police Post 1 at 270-856-3721 or anonymously at 1-800-222-5555. Citizens may also report tips anonymously through the KSP app. The app is available for iPhone, iPad and Android applications and can be easily downloaded free of charge through Apple and Google Play stores.