Calvert City, KY. (October 7, 2020) – Kentucky State Police, Post 1 Troopers and Marshall County Deputies responded around 12:30 p.m. to a residence on Lone Valley Road after a report of an attempted robbery.

Initial investigation shows that Douglas A. Key, 54 of Beaver Dam, Kentucky, made contact with a resident on Lone Valley Road, stated he was with the Paducah Sun newspaper, and wished to write an article on his business. When Key arrived at the residence and made contact with the homeowner, Key drew a handgun and pointed it at the homeowner. As Key demanded the homeowner bind his hands with zip ties, the handgun discharged, nearly striking the resident. After the homeowner bound his hands, Key attempted to bind his feet as well, but a struggle took place. The homeowner was able to disarm Key and gain control of the situation before calling 911. 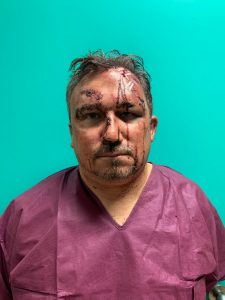