“You are the embodiment of what law enforcement does,” Hampton told those being recognized. “You stand between us and chaos. You protect those you don’t even know and you do it without asking. God bless you and your families and I pray that your end of watch comes on a day and time of your choosing.”

“Kentucky is blessed to have so many selfless, courageous professionals among the ranks of KSP,” said Secretary Tilley. “These award recipients have shown incredible strength and commitment to the safety of others – often at great personal risk – and we are honored to have them serve our commonwealth.”

KSP Commissioner Rick Sanders echoed the praise and said he is never surprised by the way the agency “answers the call.”

“The bell never rings without our men and women rising to the occasion,” he said. “I thank every member of the Kentucky State Police for their service and I thank their family members for allowing them to keep our commonwealth safe.” 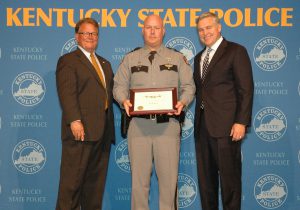 Trooper Eric West, a McCracken County resident, was named the 2017 KSP Post 1 Trooper of the Year.  Trooper West is a 3 year veteran with KSP.  During 2017, Trooper West issued 688 citations, arrested 57 impaired drivers, opened 82 criminal cases, and made 271 criminal arrests. Trooper west is assigned to the Central Squad and works Calloway and Marshall Counties.  Captain White stated in his nomination, “Trooper West always demonstrates a willingness to help other Troopers, Detectives or anyone in the public. He comes to work every day with the most positive attitude and eagerness to make a positive difference.”

Detective Trevor Pervine, a Calloway County resident, was named the 2017 KSP Post 1 Detective of the Year.  Detective Pervine is a 14 year veteran with KSP, with four of those years as Detective.  During 2017, Detective Pervine was the lead investigator in 47 cases, including 28 cases for Trafficking in Controlled Substances, 14 cases for Trafficking in Marijuana, one Manufacturing Methamphetamine case and five other drug related cases. Detective Pervine seized over $10,000 in 2017, which was illegal proceeds from Narcotics related crimes.  He seized over 10 pounds of marijuana, ½ pound of methamphetamine, 100 grams of cocaine, over 500 prescription pills, 20 firearms, and two vehicles.  Captain White stated in his nomination, “Detective Pervine brings his A-game to every shift, every task, every time. He is looked to as an informal leader and respected by many.”