Symsonia, KY. (January 20, 2022) – Kentucky State Police (KSP) Post 1 received a call just after 4:30 pm CST on January 19, 2022 from a juvenile who reported that her mother had assaulted her at their residence in Graves County.  While troopers were responding to the residence, they were advised that the mother had left the residence in a red Chevrolet car. Troopers observed a 2011 red Chevrolet HHR commit a traffic violation at the intersection of State Route 534 and State Route 348 in Symsonia while they were responding to the call.

A Trooper activated his emergency equipment to attempt to stop the vehicle, but the operator disregarded the Trooper’s emergency equipment and continued westbound on State Route 348, reaching speeds of approximately 100 miles per hour in a reckless manner. The pursuit continued into McCracken County along several roadways until the Chevy HHR was involved in a single-vehicle collision on Benton Road. At one point during the pursuit, the Chevy HHR began traveling east in the westbound lane of US Highway 62, directly towards a Trooper who had to perform an evasive maneuver to avoid a head-on collision.

The operator of the Chevy HHR was identified as Brittany A. Kimsey, 32 year old female of Symsonia, KY, who was confirmed to be the mother of the juvenile caller.

Troopers were able to make contact with the juvenile caller and investigate the assault. The juvenile was released to another family member.

The investigation is ongoing by Trooper Eric West and Trooper Justin Fox. 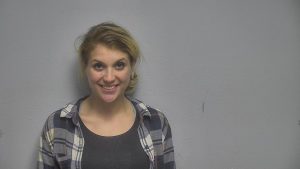