Around 10:15 p.m. Wednesday night, Troopers attempted to stop a silver Ford Mustang for a violation around the 37 mile marker westbound on Interstate 24. The Mustang fled from Troopers, reaching speeds near 150 mph. The Mustang then exited Interstate 24 at Exit 31 before crashing at the end of Morris Road in Livingston County. After disabling the vehicle, the driver fled on foot. Troopers searched the area, but were unable to locate the driver, identified as Jameer D. Riley, 19 of Princeton, Kentucky.

This morning, warrants were obtained for Riley’s arrest. He was taken into custody this evening and lodged in the McCracken County Regional Jail. Riley was charged with Fleeing or Evading Police 1st Degree (Motor Vehicle), Wanton Endangerment 1st Degree, Fleeing or Evading Police 1st Degree (On Foot), Possession of Marijuana, Drug Paraphernalia – Buy/Possess, and other traffic offenses. 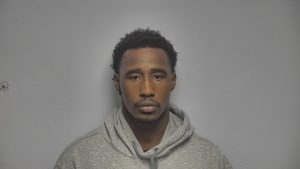