SEDALIA, Ky. (October 4, 2022) – The suspect has been identified and the payment has been resolved between the suspect and the business.

SEDALIA, Ky. (October 3, 2022) – Kentucky State Police (KSP), Post 1 (Mayfield), is requesting the public’s assistance in identifying a theft suspect. On Friday, September 30, 2022 at approximately 1:43pm, the operator of a red Ford pickup truck got fuel from Bob and Ann’s Market in Sedalia, but did not pay for the fuel. The operator laid the fuel nozzle on the ground after pumping fuel and then left the gas station without paying.

The below picture was obtained from security camera footage at the gas station. The gas station attendant advised the red paint on the truck appeared to be faded. The operator is believed to have been a white male. The truck was last seen leaving the gas station, traveling east on KY-339.

Anyone with information regarding the identity of the owner or operator of this truck is asked to contact Kentucky State Police, Post 1 at 270-856-3721 or anonymously at 1-800-222-5555.  Citizens may also report tips anonymously through the KSP app.  The app is available for iPhone, iPad and Android applications and can be easily downloaded free of charge through Apple and Google Play stores. 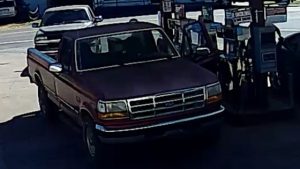