Paducah, KY. (December 5, 2020) – Saturday morning, Troopers with Kentucky State Police, Post 1 arrested a Tennessee man after he fled from a traffic safety checkpoint and lead law enforcement on a pursuit through two counties. Around 11:10 a.m., Post 1 Troopers and deputies with the McCracken County Sheriff’s Office were conducting a traffic safety checkpoint at the intersection of KY 994 and KY 1014 (Houser Road). A 2014 Chrysler 300, operated by Desmond M. Hubbard, 34 of Humboldt, Tennessee, approached the checkpoint. Hubbard was directed to a secondary location by law enforcement, but refused and accelerated away from the scene, nearly striking a Trooper and a deputy. Hubbard fled the checkpoint location and headed south on Houser Road. Troopers pursued Hubbard on Houser Road and continued into Graves County on Whiteside Road. Hubbard left the roadway, traveled through a field, and struck a tree. Hubbard fled the collision scene on foot and was located near a barn on Wice Church Road. 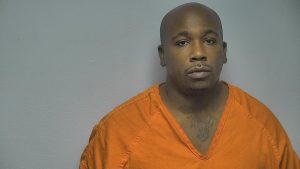