Paducah, KY. (February 25, 2020) – At approximately 1:17 p.m. this afternoon, Kentucky State Police was , along with the Paducah Police Department, are currently searching for an inmate who left a work release program at Brooks Stadium in Paducah. Inmate Daniel E. Bell, Jr., 35, of Paintsville, Kentucky, was last seen at Brooks Stadium as part of a work release program around 5:40 p.m. this evening. It is believed he stole a maroon 2000 Chevrolet Silverado pickup truck (KY registration 055-VVX). Bell may be headed east, but the direction of travel is not certain at this time. Bell is described as a white male, 6’2″ tall, weighing approximately 218 lbs. He has blonde hair and blue eyes.

Kentucky State Police are investigating the escape while the Paducah Police Department is conducting an investigation into the stolen vehicle. Anyone with information is asked to contact the Kentucky State Police Post 1 at 270-856-3721 or anonymously at 1-800-222-5555.  Citizens may also report tips anonymously through the KSP app.  The app is available for iPhone, iPad and Android applications and can be easily downloaded free of charge through Apple and Google Play stores. 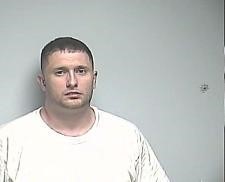