MAYFIELD, Ky. (March. 10, 2022) – Congratulations to Kentucky State Police Trooper Sarah Burgess, who received the Kentucky Crisis Intervention Team (CIT) Police Officer of the Year award. Burgess is a back-to-back winner, receiving the award for her work with citizens living with mental illness in 2019 and 2020. On Friday, Feb. 25, 2022, she received the honor at the CIT Annual Awards Ceremony.

Trooper Burgess is assigned to KSP Post 1 Mayfield, and her commander says troopers are often tasked with filling multiple roles, including peace keeper, mediator, and counselor.

“She works tirelessly to bring critical incidents to positive conclusions through the use of her training, experience, and zeal for public service to help people in their darkest hour,” said Captain David Archer. “Her modesty will prevent her from recognizing the crucial role she plays in the team of troopers that responded to these incidents. The actions by Trooper Burgess and her fellow troopers truly embody the “service above self” that our troopers give every day.”

She was recognized for the incident in the Post 1 Area when a dispatch call came in about a suicidal woman armed with a pistol. The caller was upset over medical care from a past assault and requested to speak with a female trooper. Trooper Burgess, who was not on duty, left her home and immediately responded to the scene. Trooper Burgess was calm, sympathetic, and quickly established a rapport with the woman. After lengthy conversations, Burgess convinced the woman to surrender her weapon. Burgess stayed with the woman, providing comfort to her while she was evaluated throughout the process until she was admitted into Western State Hospital.

“As a Trooper, I often interact with people on their worst days and compassion is essential for the best chance of a positive outcome from those situations,” said Trooper Sarah Burgess. “I am thankful for the training that I have received through CIT and for the teamwork of my fellow troopers and local law enforcement officers for the incidents that led to this recognition.”

The mission of KSP is to promote public safety through service, integrity, and professionalism using partnerships to prevent, reduce and deter crime and the fear of crime, enhance highway safety through education and enforcement, safeguard property and protect individual rights.

This year, the number one priority for KSP is creating a better Kentucky by making the commonwealth’s streets safer, communities stronger and the nation more secure by providing exceptional law enforcement made up of a diverse workforce. For more information about career opportunities with KSP visit their website. 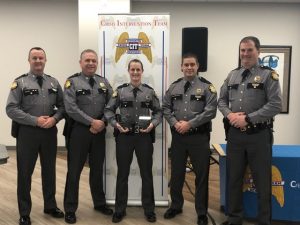