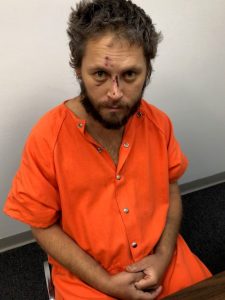 Eddyville, KY (August 24, 2019) –  Kentucky State Police investigators have charged a Florida man in connection to a murder in Colorado.  On Friday, August 23rd, Trooper TJ Williams was patrolling a portion of Interstate 24 in Lyon County when he stopped a vehicle for suspected traffic violations.  The stop resulted in the arrest of 31-year-old, John Horton, of Jacksonville Florida.  Horton was charged with DUI along with other traffic violations.  Horton was lodged in the Caldwell County Detention Center.  On Saturday, August 24th, Kentucky State Police, Post 1, received a notification from the FBI’s NCIC database stating that John Horton was wanted for Murder by the Arapahoe County Sheriff’s Office in Colorado.  An investigator with Kentucky State Police contacted authorities in Colorado and learned that Horton had been entered into the database earlier on Saturday.  The FBI automatically notifies any agency who had recently run Horton through the database.  Kentucky State Police detectives travelled to the Caldwell County Jail and served Horton with an arrest warrant for Murder.  He remains lodged in the Caldwell County Jail.  Authorities with the Arapahoe County Sheriff’s Office in Colorado are making arrangements to travel to Post 1 in the coming days in an effort to further their investigation.  Kentucky State Police continue to assist Colorado Authorities.