MAYFIELD, Ky. (September 12, 2022) – The Kentucky State Police (KSP) held its annual sworn awards ceremony in Lexington to honor 75 troopers and officers who put on a uniform each day to patrol Kentucky’s neighborhoods with a mission of serving and protecting their fellow citizens. The achievement awards presented were for acts of bravery and service that occurred in 2021.

Five troopers from the Post 1 area were included in those honors.

Trooper Cody Jackson was named 2021 Post 1 Trooper of the Year. Trooper Jackson is a 2-year veteran of KSP assigned to Post 1 Mayfield.

Detective Nathan Moore was named 2021 Post 1 Detective of the Year and received the KSP Citation for Bravery. Detective Moore is a 4-year veteran of KSP assigned to Post 1 Mayfield.

Post 1 Commander David Archer states, “The humble nature of our troopers and detectives does not lend itself easily to recognition, yet the actions that lead to these awards are noteworthy.  Each of these troopers distinguished themselves during 2021 while serving their fellow Kentuckians.  They are to be commended for their hard work and dedication to duty that has made Post 1 a safer place to live.” 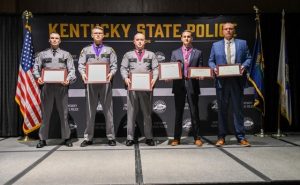