Eddyville, KY. (September 9, 2021) – Troopers with Kentucky State Police, Post 1 arrested a Hopkins County man after a late night stand-off with law enforcement. Shortly before 9:00 p.m. Wednesday, September 8th, Post 1 Dispatch received reports of a male walking down Interstate 24 near the 51 mile marker westbound with a flashlight. Troopers quickly responded to the area and made contact with the individual. After law enforcement from other agencies arrived to the scene, it was determined the male was holding a handgun. The male fired the handgun multiple times toward the ground and in the air. After more than an hour of law enforcement speaking with the male, he was taken into custody. Adornato’s vehicle was later discovered on a side road nearby the Interstate.

Dean D. Adornato, 26 of Nebo, Kentucky was charged with three counts of Wanton Endangerment 1st Degree and Possession of Firearm by Convicted Felon. He was lodged in the Christian County Jail.

Neither Adornato nor any law enforcement units were injured during the incident and law enforcement did not discharge any weapons. Kentucky State Police, Post 1 was assisted on scene by Kentucky State Police, Post 2, Lyon County Sheriff’s Office, Eddyville Police Department, Trigg County Sheriff’s Office, Lyon County Highway Department, and Lyon County EMS. Both lanes of Interstate 24 were shut down for approximately two hours. 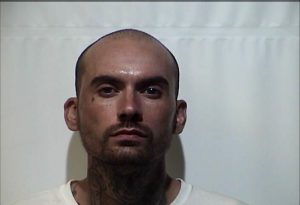