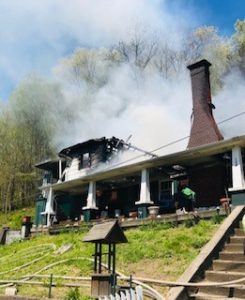 KSP can confirm a male and female have been flown to Holston Valley Hospital in Tennessee for life threatening injuries. These two individuals are husband and wife and also own the residence.

Several local fire departments are on the scene attempting to distinguish the fire. KSP has several Detectives on the scene. No other information can be released at this time. KSP will continue to update as more information comes available.

As of 4:30 p.m. KSP has learned both adults are being flown to a hospital in Augusta Ga for treatment due to the burns both suffered. Both are listed with life threatening injuries.

KSP has been notified that the male and female who suffered burns, have twin three year old children not accounted for at this time. KSP can only confirm firefighters along with KSP are still on the scene and have not made contact with the twins at this time.

KSP will continue to update as we receive more information.

At approximately 6:30 p.m. KSP can confirm the twin three year old children have been located deceased inside of the residence. Harlan County Coroner has pronounced both deceased and will sending both kids to the State Medical Examiner’s Office in Frankfort for an autopsy.

KSP is continuing to investigate what caused the fire and will release information as it comes available.

KSP is now releasing the names of the couple that was flown out from the house fire in Harlan County yesterday. Dennis Chad Howard (39) of Totz and his wife Allyson Howard (42) of Totz. KSP will not be releasing the names of the three year old twins. KSP is currently waiting on an update from the hospital on both adults. We will continue to update as more information comes available.

KSP is continuing to work with the Fire Marshalls Office to investigate what caused the fire. This process will take some time for it can be determined.

Case is under investigation by Det. Aaron Frederick.

KSP has been notified that Allyson Howard (42) of Totz has passed away in the hospital in Augusta Ga. Her husband Dennis Chad Howard remains in critical condition.