Case is under investigation by Det. Aaron Frederick. 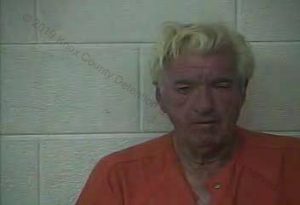 Girdler Ky. (May 13, 2019) On May 11, 2019 Kentucky State Police, Post 10 Harlan received a complaint from a 29 year old female stating that 71 year old Clark Mills who she knew through her church, had picked her up from her house in the Girdler community of Knox County and drove to a motel in Bell County.  While at the motel, Mr. Mills and the female had sexual intercourse in a rented room. The 29 year old female has an evident mental disability and is legally blind. The mother who is her guardianship did not know of her whereabouts for a few hours while she was gone. On Mr. Mills and the females return back to Knox County, a family member spotted her getting out of Mr. Mills pickup truck. Once home, she told her mother of the sexual intercourse with Mr. Mills that occurred.

During the investigation Mr. Mills admitted to KSP Det. Aaron Frederick to having sexual intercourse with the female in the motel room. He also admitted to knowing her for two years and that she had a mental handicap/disability. Mr. Mills mostly knew her from driving the church bus and picking her up.