KSP investigators are searching for perpetrator. 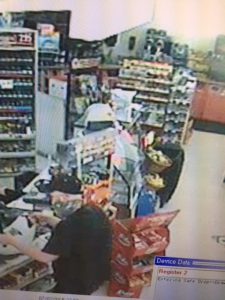 Hindman, Ky. (July 2, 2018) – Kentucky State Police Troopers are actively searching for the person responsible for the armed robbery of a Knott County business which occurred early Monday evening.  At approximately 5:22 p.m., KSP Post 13 personnel were called to the Hindman Redi Mart Convenience Store on KY 160 in Hindman in response to the robbery incident.  Troopers were assisted at the scene by Knott County Sheriff’s Department and Kentucky Fish and Wildlife officers.

Redi Mart employees advised investigators that a male subject, wearing a mask and sunglasses, entered the store and brandished a knife to the clerk.  He demanded cash from the register, then left the store with an undetermined amount of money.  The man was last seen running away on foot into a wooded area near the store.  Officers searched the area but were unable to locate this individual.

The robber is described as being a white male who is between 5 feet 6 inches and 6 feet tall, weighing approximately 200 pounds and being of a medium build.  He has light colored hair and a pale complexion.  He was last seen wearing a black t-shirt and dark pants.  Anyone with information related to this incident is urged to contact KSP Post 13 at 606-435-6069 or by contacting the KSP web page, social media sites or smart phone app.  Tpr. Chadd Daniels with KSP Post 13 is leading this investigation.