Columbia, KY. (July 26, 2021) – Executive Cabinet Secretary J. Michael Brown joined Kentucky State Police (KSP) Commissioner Phillip Burnett, Jr. to recognize 58 KSP troopers and officers for their professionalism and dedication to duty at a ceremony in Lexington. Due to the coronavirus pandemic, the award ceremony, originally scheduled to take place in 2020, was postponed. The achievement awards presented at the ceremony were for acts of service that occurred 2019.

Post 15 troopers were included in those honors.
Trooper Clinton D. Bale was named the Post 15 Trooper of the Year. An 8-year veteran of the Kentucky State Police, he is currently assigned to the Executive Security Branch.

Detective Nicholas B. Davis was named Post 15 Detective of the Year. An 11-year veteran of the Kentucky State Police, he is currently assigned to Post 15 Columbia. 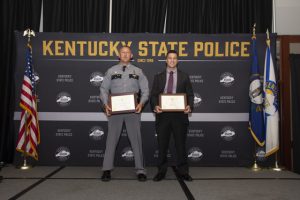