Campbellsville, KY. (July 29, 2021) –Today, the Kentucky State Police (KSP) and the Kentucky Transportation Cabinet (KYTC) unveiled new signage renaming a portion of Kentucky Highway 55 in Taylor County in honor of Sergeant David R. Gibbs, who was involved in a fatal crash in 2015, while on duty. KSP was joined by Sergeant Gibbs’ family, Justice and Public Safety Cabinet Deputy Secretary Ronnie Bastin and KYTC Chief District Engineer for the Department of Highways, Paul Sanders.

“I appreciate KSP and KYTC for paying tribute to Sgt. Gibbs’ heroic and courageous dedication when he answered the call to serve and protect Kentucky,” said Gov. Beshear. “The commonwealth will never forget the contributions made by Sgt. Gibbs.”

During the roadway dedication, KSP Commissioner Phillip Burnett, Jr. thanked Sgt. Gibbs and his family for serving the commonwealth. “Sgt. Gibbs spent most of his seventeen years of service at Post 15 Columbia, except for six months at Post 12 Frankfort when he promoted to sergeant in 2006. He loved being a trooper and he loved serving the people of this community on a daily basis.”

The Kentucky Transportation Cabinet facilitated the official renaming project and provided new signage on Kentucky Highway 55. Chief District Engineer Paul Sanders attended the ceremony and spoke on behalf of Transportation Cabinet Secretary Jim Gray, when he said that the Cabinet is honored to recognize Sergeant Gibbs’ service and sacrifice with this signage.

“We hope this action today of naming Kentucky Highway 55 in his honor will leave a continuous reminder to his dedication to public safety in the community that he cared so much for,” said Sanders.

As a longtime law enforcement leader in Kentucky, Ronnie Bastin, Deputy Secretary of the Justice and Public Safety Cabinet, spoke at the ceremony stating that he understands first-hand that losing a colleague is never easy, and it is especially difficult when their life is taken while on duty.

“No job was taken lightly and Sgt. Gibbs was always determined to provide that selfless sacrifice that is engrained in so many law enforcement officers,” said Deputy Secretary Bastin. “Sgt. Gibbs, like many of his KSP colleagues, left home knowing he might not return but  his work would not be done in vain. The loss of Sgt. Gibbs has left a void in this state, community and agency.”

KSP Sergeant Adam Likins, one of Gibbs’ closest friends, spoke on behalf of the Gibbs family at the ceremony.

“Everyone who knew David, loved him,” said Likins. “His smile and his kindness were known by everyone. He loved his friends and his family but most of all he loved being a Kentucky State Police Trooper.”

The Gibbs family assisted officials with unveiling the official highway sign during the ceremony, which was held at Swan’s Landing in Campbellsville, Ky. 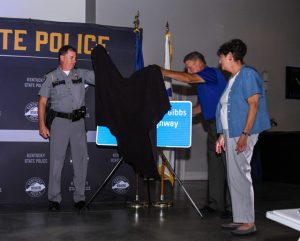 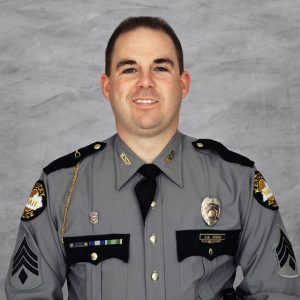 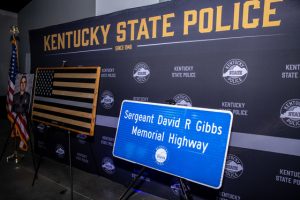