HENDERSON, Ky. (Oct. 29, 2021) – On October 27, Lt. Gov. Jacqueline Coleman joined Kentucky State Police (KSP) to recognize the promotion of 26 troopers and officers who were promoted since May 1, 2021 including one lieutenant colonel, one major, four captains, four lieutenants and 16 sergeants where commissioned with a mission of creating a better Kentucky through public safety efforts and service to all Kentuckians.

Sergeant Aaron Pryor was promoted to lieutenant and is assigned to Post 16 Henderson.

Sergeant Brandon M. Goodman was promoted to lieutenant and is assigned to the CVE West Region.

Trooper Jason A. Adkison was promoted to sergeant and is assigned to Post 16 Henderson.

Trooper Myles T. Scott was promoted to sergeant and is assigned to Post 16 Henderson.

Trooper Timothy A. Payne was promoted to sergeant and is assigned to Post 16 Henderson.

Post 16 Commander, Captain Brenton Ford said, “Promoting these skilled men into the roles of leadership will not only enhance our service to our communities but also provide the additional support to our troopers answering the calls of service”. 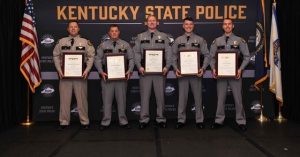