Trooper Blake Owens was named Post-Level Trooper of the Year. A four-year veteran of the Kentucky State Police, Owens is assigned to Daviess and Hancock counties. He is originally a Frankfort resident and graduated from Western Hills High School in 2009. He also graduated from University of Kentucky in 2013.

Trooper Owens has demonstrated exemplary service as a patrol unit. He has a tremendous work ethic and maintains a positive attitude at all times. Trooper Owens is proactive in investigations and has conducted numerous investigations resulting in many arrests. 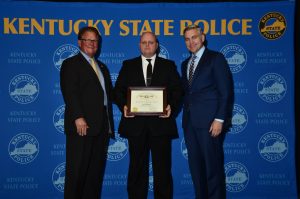 Detective Adam Wright was named Post-Level Detective of the Year. A six-year veteran of the Kentucky State Police, he is assigned to Ohio and McLean counties.  Detective Wright was appointed detective in 2017. He accepted his role and has become a valued member of the agency.  He is often tasked with complex investigations and has investigated cases ranging from child sexual exploitation to rape and has a very high clearance rate for the post.

Post 16 Commander Brenton Ford said he is proud of the commitment and efforts of these units.

“These troopers are shining examples of devoted service and commitment to others above self,” he said. “I commend them and their families who allow them to serve the Commonwealth on a daily basis.”