Dawson Springs, Ky. (Hopkins County) – The Kentucky State Police Post 2 would like to extend their appreciation to the media and public for their assistance in locating the commercial vehicle involved in this investigation. Several tips came in yesterday and Troopers were able to locate the vehicle. The investigation remains ongoing at this time.

Dawson Springs, Ky. (Hopkins County) – Kentucky State Police Post 2 are seeking the help of the public in attempting to identify the driver or company of a white 2018-2022 Freightliner Cascadia.  Evidence recovered from the scene indicates this vehicle is suspected to have struck Michael “Andrew” Dowd between 2/4/2021 and 2/7/2021, causing damage to the front passenger headlight assembly and hood.  The incident occurred near the city of Nortonville, on the southbound side of Interstate 69, near the 103 mile marker in Hopkins County, Kentucky.  It is possible that the commercial vehicle driver did not realize they struck a pedestrian and may have suspected they struck an animal or object.  Any commercial vehicle company with damage sustained, involving the replacement of the passenger headlight assembly and hood, are asked to contact the Kentucky State Police, Post 2 at 270-676-3313.

Dawson Springs, Ky. (Hopkins County) – Kentucky State Police Post 2 was contacted by the Hopkins County Sheriff’s Department around 1:00 AM on February 7, 2021. A deceased male was located off of the southbound lanes of travel of I-69 near the 103 mile marker.

When KSP arrived on scene they confirmed the deceased male to be reported missing person Michael “Andrew” Dowd. An autopsy is scheduled for Monday February 8, 2021. The investigation is ongoing.

Dawson Springs, Ky. (Hopkins County) – The Kentucky State Police is attempting to locate a missing person. Michael “Andrew” Dowd of Hopkins County was last seen on February 4, 2021, around 1:00 AM at a residence on Wells Road in Nortonville, Ky.

Dowd is a 29-year-old white male, 5’7” tall, brown hair, green eyes, and approximately 180 pounds. He was last seen wearing a camo jacket, black t-shirt, and black shorts. Anyone with information concerning the whereabouts of Dowd is urged to contact the KSP Post 2 at 1-270-676-3313 or via the Kentucky State Police app. 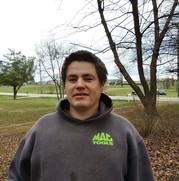