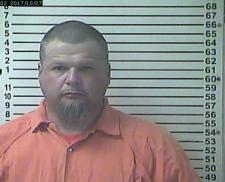 On April 13, 2019 at approximately 6:14 AM, the Kentucky State Police Post 2 in Madisonville was notified the Warren County Sheriff’s Department had located Charles Pedigo at a residence on H E Johnson Road. A home owner had called the police in reference to a man on her front porch trying to quiet her dogs. Pedigo was arrested and lodged in the Warren County Regional Jail.

Charles Pedigo was being lodged on assault charges and sentenced to 29 years and 1 day. Pedigo has ties to Allen, Hardin, and Simpson counties. If anyone has information on the whereabouts of this subject, please contact Kentucky State Police Post 2 at 270-676-3313 or by Text a Tip via the Kentucky State Police App. Callers may remain Anonymous.