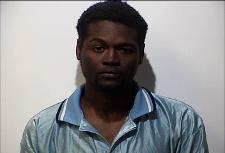 The escapee is Calvin Jermaine Merritt Jr., age 22, of Hopkinsville, KY. Merritt Jr. is a black male, approximately 5’9” tall, and weighs approximately 140 pounds. He was last seen wearing a black t-shirt, gray sweatpants, and barefoot. He has a tattoo on the left side of his neck, and Calvin tattooed on his upper right arm. He was last seen at East 5th Street and S. Virginia Street in Hopkinsville.