Michael B. Lane has been located and taken into custody by the Mount Vernon Police Department in Illinois.

Bowling Green, KY (December 17th, 2019) – On December 17, 2019 at approximately 7:15 AM, Kentucky State Police Post 3 in Bowling Green, received a call stating an inmate had walked away from a work release program near Scottsville Road and Oliver Street in Warren County.

Editor’s Note: Attached is a photo of the subject. 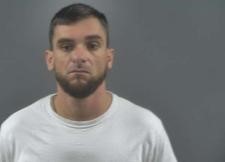