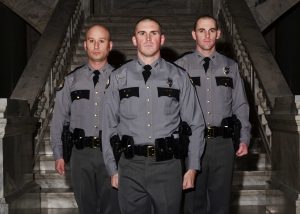 For information about a career as a Kentucky State Police Trooper, visit the KSP recruitment website at http://kentuckystatepolice.org/recruitment/ . Applicants may also call the recruitment office toll-free at 1-866-360-3165 during office hours from 8 a.m. to 4:30 p.m. (ET) Monday through Friday or leave a message any other time.