The investigation continues and is being conducted by members of the KSP Critical Incident Response Team and Post 3. 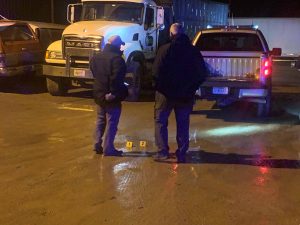 Upon his arrival, Officer Barks located Eden, who was occupying a semi truck.  Eden exited the vehicle and fled on foot near a wooded area.  A Butler County Sheriff’s deputy responded to assist Officer Barks with the search.  Eden was located in the cab of a nearby dump truck in the area.  Eden started the dump truck and proceeded to drive in the direction of Officer Barks.  Officer Barks, while on foot in the path of travel of the dump truck, fired his issued duty weapon multiple times into the windshield of the dump truck in an attempt to stop Eden’s forward progress.  Eden sustained an injury to his neck area as a result, and was then apprehended by Officer Barks.

Joseph Eden was transported from the scene by Butler County EMS and taken to the Medical Center Hospital in Bowling Green. He was eventually transported to Vanderbilt Hospital in Nashville where he is currently listed in critical, but stable condition .   Officer Barks was not injured.  Officer Barks has been placed on administrative leave, which is customary in all critical incidents, according to a Kentucky Fish and Wildlife spokesperson.

The investigation continues and is being conducted by members of the KSP Critical Incident Response Team and Post 3 Detective Joe Gregory.  No further information is available for release at this time.  Kentucky State Police will continue to update the public as more information becomes available. 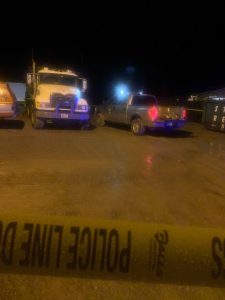