Local Trooper Earns Statewide Distinction as “Trooper of the Year” 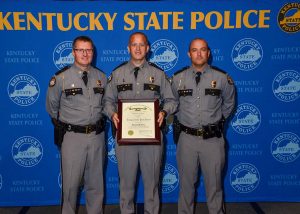 Frankfort, KY (May 30, 2019)- Gov. Matt Bevin joined Justice Secretary John Tilley and Kentucky State Police Commissioner Rick Sanders in recognizing 58 KSP troopers and officers for acts of bravery, life-saving, professionalism and dedication to duty at a ceremony held in Lexington on May 30th.

Kentucky State Police Major John Clark and Post 3 Captain Tim Adams say they are proud of the commitment and efforts of these two, and they are certainly worthy of their titles.  When referring to Trooper Priddy’s statewide distinction,  Major Clark was quoted as saying, “Trooper Priddy is a shining example of devoted service.  Tracing all the way back to the beginning, with his efforts as a dispatcher, stemming throughout his career, to where he is now with being an accident reconstructionist.  I don’t recall a trooper at Post 3 ever being named as statewide Trooper of the Year.  It is quite an accomplishment.” 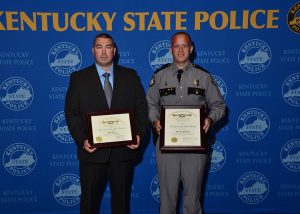 Trooper Priddy, an Edmonson County native, is a 15 year veteran with the Kentucky State Police and has served in his current assignment for 5 years.  He is a graduate of Edmonson County High School and attended Western Kentucky University.  Trooper Priddy served as a Kentucky State Police Telecommunicator from 2004-2014 until entering the KSP academy.  He is the son of Rondal and Theresa Priddy of Brownsville, KY.