The ongoing investigation is being led by Detective Johnson. 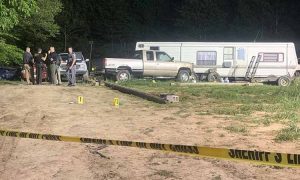 Scottsville, KY (May 8, 2019)- On Tuesday evening, May 7th at 7:38 PM (CST), KSP Post 3 dispatch received a call for service from Allen County dispatch requesting assistance with a death investigation that had occurred at 151 Stinson Lane, near the Tennessee state line.  Allen County deputies had responded to the address and located a deceased male in a yard near the driveway of the residence.

KSP uniformed troopers and detectives responded to the scene.  Preliminary investigation has revealed a resident of 151 Stinson Lane, Justin A. Wix (47), was outside his residence when he sustained multiple gunshot wounds, contributing to his death.  Wix was pronounced deceased on scene by the Allen County Coroner’s Office.

Kentucky State Police is requesting that anyone with any information or leads concerning the death of Justin A. Wix to contact Detective Jonathan Johnson with KSP Post 3 at the following number:  (270) 782-2010.

No further information is available for release at this time.