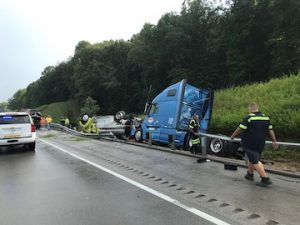 Bonnieville, KY  ( July 30, 2019)-  Tuesday evening at 04:14 pm (CST)  the Kentucky State Police Post 3, Bowling Green received a call for service in reference to a two vehicle injury collision that had occurred southbound on Interstate 65 near the 65 mile marker.  Troopers from KSP Post 3 responded to the scene.

A preliminary investigation has revealed that an uninvolved non-injury collision had occurred near the 65 mile marker of Interstate 65 and Munfordville Fire Department was dispatched to respond.  Charles Jones (37) of Munfordville, KY was operating a 2008 Kenworth fire truck owned by Munfordville Fire Department, equipped with red emergency lights and sirens that were activated.  Hardeep S. Gill (32) of Windsor, Ontario, who was operating a 2019 Volvo semi-truck and trailer, failed to see the fire truck and the activated emergency equipment, striking it in the rear drivers side causing the vehicle to overturn.

Charles Jones and passenger, Jeremy Reynolds (42) of Munfordville, were transported to Caverna Hospital where they were treated and released for injuries sustained in the collision.  Hardeep S. Gill was not injured but was cited for the following charges:

The Kentucky State Police would like to remind motorist to reduce speed and move over when approaching emergency vehicles with activated lights.