Elizabethtown, Ky. (Jan. 25, 2021) — Today, the Kentucky State Police (KSP) Training Academy, along with the Governor’s Office and the Justice and Public Safety Cabinet, presented graduation diploma’s to forty-five new troopers. Of those, five new troopers are assigned to Post 4. These cadets have special significance as they represent the one-hundredth training class since the inception of the agency in 1948.

KSP Post 4 Captain, Daniel White is excited to welcome new troopers to Elizabethtown. White said the troopers are beginning a rewarding career and it will be an honor to serve alongside them.

“Class 100 will be known as a historical class in KSP history. This class was not only the 100th graduating class from the KSP Academy; it also had to endure through a pandemic. We are honored to welcome five of those new troopers to Post 4 and I’m excited to watch them embark on their new career,” said White.

The Post 4 graduates of the 100th KSP Training Academy included:

Several members of the graduating class earned special recognitions during the ceremony. The honor of Valedictorian was awarded to Trooper Robert Moster III.

Seventeen cadets earned their Associate’s Degrees in General Occupational and Technical Studies from the Bluegrass Community and Technical College during their 24-weeks at the training academy. These cadets benefited from new hiring guidelines established by state legislature in 2017. Post 4 trooper, Blaine Miller of Mt. Washington, Ky. received his associate’s degree. Through this revision, anyone who possesses a high school diploma or GED, and has three years of full-time work experience can apply for employment as a KSP Trooper and earn an associate’s degree during the training process. 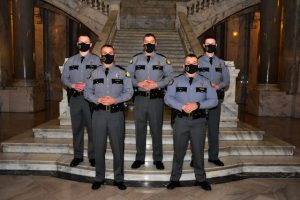