Campbellsville, KY. (January 28, 2021) – A Kentucky State Police Trooper conducted a traffic stop on KY 210, 10 miles north of Campbellsville around 10:33a.m. for a traffic violation.  During the stop the trooper determined the vehicle being driven by Casey D’Amore, 20 of Magnolia had a strong odor of Marijuana coming from inside.  A Kentucky State Police K-9 was able to locate the presence of narcotics.  The driver was arrested and charged with the following:

A passenger identified as Scott Kuchera  21 of Campbellsville was also arrested and charged with the following:

Both men were lodged in the Taylor County Detention Center.

Trooper Jamie Heller is investigating and was assisted by other members of the Kentucky State Police. 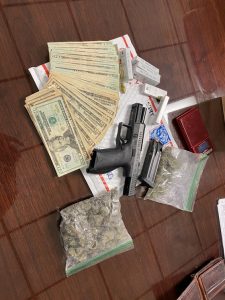