Hodgenville, KY. (October 1, 2020) –Kentucky State Police Post 4 detectives are conducting a death investigation in Hodgenville, Ky.  On September 30, 2020 at approximately 11:35 PM EDT; KSP Post 4 was contacted by the Hodgenville Police Department requesting assistance with a shooting that occurred at 116 Dana Drive in Hodgenville.  Through the investigation, detectives were able to determine that Levi G. Sheroon, 21 of Mount Sherman, suffered a single gunshot to the chest and was transported to Baptist Health Hardin where he later succumbed to his injuries. An autopsy is scheduled for later today at the Kentucky Medical Examiner’s Office in Louisville.

KSP detectives are looking for Timothy R. Hedges, 22 of Hodgenville. Detectives believe Hedges may have information in regards to this active death investigation. Hedges currently has active warrants for his arrest and should be considered armed and dangerous. Anybody with information about Hedges whereabouts should contact KSP Post 4 at (270) 766-5078 or local law enforcement agency, do not attempt to approach or apprehend. 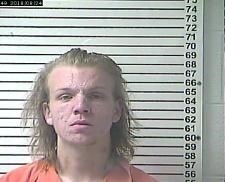