KSP Arrests DUI Driver After He Wrecks Into Multiple Houses

New Castle, KY. (June 19, 2020) – On Wednesday June 17th, Kentucky State Police Post 5 arrested a New Castle man after he crashed his vehicle into two houses in New Castle. Post 5 received multiple 911 calls about a reckless driver near New Castle in Henry County, and Trooper Joshua Housley was flagged down by a motorist advising a blue Jeep had left the roadway numerous times while traveling down the road.

Trooper Housley located the vehicle traveling on South Property Road in New Castle, a heavily congested area. Just prior to initiating a traffic stop Trooper Housley observed the driver lose control of the vehicle.  The Jeep traveled through several yards and struck two separate houses before finally coming to a stop. The driver was identified as Charles Phillips, 24, of New Castle. Through the course of the investigation, Phillips was determined to be under the influence at the time and arrested without incident.

There were people inside the homes at the time of the wreck including children; fortunately no individuals were injured. 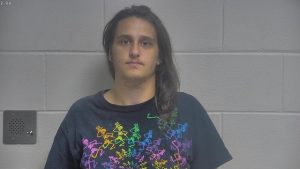