Captain Walker is excited to join the Campbellsburg Post Area community and looks forward to this new challenge, providing this statement: “I’m humbled by the privilege to have filled multiple commands over the last fourteen years of my 26+ year career; having this opportunity to serve as the commander of KSP Post 5 brings me back “full circle” to the community service that originally brought me to the Kentucky State Police over two and a half decades ago. I look forward to working with you, while assisting the dedicated men and women of KSP Post 5 meet both your community needs and expectations.”

Captain Walker is a native of Boonville, IN and resides with his wife Marcia in Pleasureville. 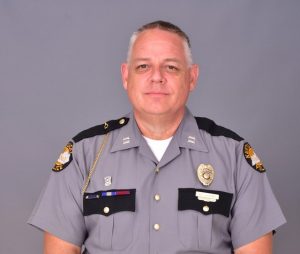