Captain Felder graduated the Kentucky State Police in December 2005 and served at Post 7-Richmond as a Trooper until August 2012. On August 16, 2012 Felder promoted to Sergeant and served at Post 12-Frankfort. On May 1, 2015 Felder promoted to Lieutenant and was transferred to Post 14-Ashland. There he served as the Investigative Lieutenant in charge of the Detectives. On September 1, 2015 Felder transferred to Post 11-London, continuing to serve as the Investigative Lieutenant. On January 16, 2017 Lieutenant Felder was transferred Post 7-Richmond, where he served as the Operations Lieutenant in charge of the uniformed Troopers. On September 1, 2018 Felder promoted to Captain and was the Commander in charge of the Criminal Identification and Records Branch as well as the Computer Technologies Branch. On March 1, 2020 Felder was transferred to the Inspections Branch. Almost immediately, he was assigned to the Governors COVID-19 response team for the State of Kentucky.  In that capacity, Captain Felder travelled the state in an effort to set up the Drive-Thru testing sites. Working with local law enforcement, Emergency Medical Services, Kentucky Transportation Cabinet, local Emergency Management Directors and Kentucky National Guardsmen, Captain Felder would complete Operational Plans and ensure the site was accessible to the public with minimal impact on surrounding businesses and traffic patterns. On September 1, 2020 Captain Felder was transferred to Post 11-London as the Commander where he remained until being assigned to Dry Ridge.

Captain Felder is the recipient of several awards to include seat belt occupant safety, two Commissioners Commendations and the Lifesaving Medal.

A former Georgia resident, Captain Felder grew up in Rincon Georgia and graduated from Effingham County High School in 1988. In June of 1988 Felder entered the United States Marine Corps. He was also a Reserve Military Police Officer on Camp Lejeune. In August 1990, Captain Felder’s unit deployed to the Persian Gulf in support of Operation Desert Shield and Desert Storm.

After his enlistment in the Marine Corps, Felder moved to Winchester Kentucky. There he worked at the Winchester Public Works and then was employed as a Winchester Firefighter and Emergency Medical Technician. In 2004, Felder was accepted to the Lifenet Paramedic program and graduated from it in May 2005 before his acceptance to the Kentucky State Police Academy.

Captain Felder is married and has three children. 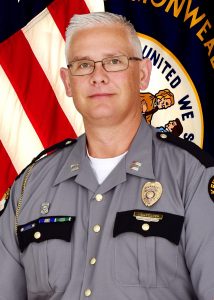