Morehead, KY. (January 22, 2021) – Today, the Kentucky State Police (KSP) Training Academy, along with the Governor’s Office and the Justice and Public Safety Cabinet, presented graduation diploma’s to forty-five new troopers. Of those, four new troopers are assigned to Post 8. These cadets have special significance as they represent the one-hundredth training class since the inception of the agency in 1948.

KSP Post 8 Captain, Danny Caudill is excited to welcome new troopers to Morehead. Caudill said the troopers are beginning a rewarding career and it will be an honor to serve alongside them.

The Post 8 graduates of the 100th KSP Training Academy included:

Seventeen cadets earned their Associate’s Degrees in General Occupational and Technical Studies from the Bluegrass Community and Technical College during their 24-weeks at the training academy. Post 8 trooper, Benjamin Allen of Mt. Vernon, Ky. received his associate’s degree. These cadets benefited from new hiring guidelines established by state legislature in 2017. Through this revision, anyone who possesses a high school diploma or GED, and has three years of full-time work experience can apply for employment as a KSP Trooper and earn an associate’s degree during the training process. 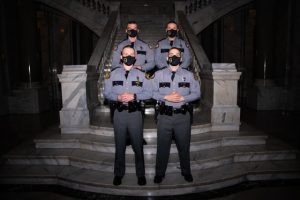