OLD CASE ON THE MURDER OF ROBERT (BOB) PAUL HUNT

OLD CASE ON THE MURDER OF ROBERT (BOB) PAUL HUNT

Description: The Kentucky State Police request help in resolving the murder of Robert (Bob) Paul Hunt on December 2nd, 2003 Robert (Bob) Paul Hunt was murdered in his home on Armes-Lively Road in Grayson County. He was dropped off by a friend at approximately 11:30 p.m. on the 1st and was killed after 12:10 a.m. on December 2nd. He was shot several times while he was lying in bed. They had left the American Legion in Leitchfield. No arrests have been made in this case.

If you wish to report more information on this Cold Case, use the form below.

However, if you need to report information that is of an emergency nature, please contact the Kentucky State Police toll free at 1-800-222-5555 (in the state of Kentucky only, does not work out of state) or call your local police/sheriff department at 911. 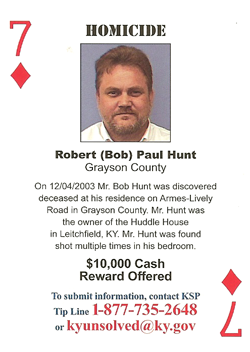