A photo is included of Nicholas Rucker.

The ongoing investigation is being led by Detective Johnson.

Five Year Anniversary Of The Murder Of Kathy and Samantha Netherland

Detective Correll is continuing the investigation. 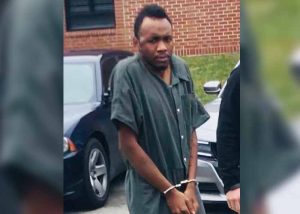 Preliminary investigation indicates at 12:04 a.m. an unknown black male, wearing a gray hoodie, black pants with tan boots entered the store and pointed a handgun at the clerk. A bystander in the store attempted to flee from the store when the suspect fired multiple shots at the bystander striking him.

Gary Medlin (25) of Barbourville was shot and killed while attempting to exit the store. Mr. Medlin was pronounced deceased by Deputy Coroner’s from the Knox County Coroner’s Office.

After the shooting took place the unknown suspect left the store on foot and has not be located at this time. KSP is currently attempting to locate the suspect.

No other individuals were injured during the shooting.

The body will be sent to State Medical Examiner’s Office in Frankfort for an autopsy.

Kentucky State police are asking the public for assistance with information on the suspect. KSP is continuing to attempt to locate this individual. Anyone with information can contact Post 10 Harlan at 606-573-3131.

As of January 16, 2019 at 6:30 p.m. Kentucky State Police have not made any arrest in this case. KSP is continuing to investigate tips and information on possible suspects. Anyone with information on this case is urged to contact Post 10 Harlan at 606-573-3131 or you can leave information on our KSP Facebook page.

No new information at this time.

KSP has been made aware of individual’s posting on Facebook that a suspect has been arrested but this is not true.

Case is still under investigation.

Kentucky State Police is asking the public for assistance locating Phillip Lee Lewis III in connection to the murder that occurred during a robbery in Knox County on January 16, 2019 at the A&B Quick Stop in the Gray community of Knox County.

Mr. Lewis is a 24 year old black male, 6’0’’, 160 pounds, with brown eyes and black hair. He also has a tattoo on his right forearm and left chest. Mr. Lewis is considered to be armed and dangerous and currently wanted out of Mississippi for a probation violation warrant. He has known connections to Michigan and Mississippi.

On January 17, 2019 KSP Detective Jake Wilson has obtained an arrest warrant for Mr. Lewis for Murder and Robbery 1st degree. Anyone with information on his whereabouts is urged to contact Post 10 Harlan at 606-573-3131 and not to approach him.

On February 8, 2019 at approximately 3:50 p.m. Phillip Lee Lewis (24) was taken into custody and arrested by a task force in Flint, Michigan. Mr. Lewis is charged with murder and robbery 1st degree. He will also have federal charges pending. Mr. Lewis will be lodged in Flint Michigan until he can be brought back to KY. The task force that located Mr. Lewis is made up of Michigan State Police, U.S. Marshalls and FBI.

This is all the information that can be released at this time. KSP will release more information as it comes available.

Case is still under investigation.

On March 4, 2019 KSP was able to take Phillip Lee Lewis into custody. Mr. Lewis is now charged with murder and robbery 1st degree. Mr. Lewis will be lodged into the Knox County Detention center awaiting his court appearance.

KSP is continuing the investigation.

This case remains under investigation by Detectives from the Kentucky State Police.

The Kentucky State Police are also asking for the public’s help.

Shannon Weddington was charged with Murder