KSP Searching for Male who Fled after Physical Altercation

Pendleton, KY. (January 25, 2020) – Kentucky State Police are trying to identify an individual that, preliminary investigation leads investigators to believe, is a suspect in a vandalism/criminal mischief case in Henry County. On Thursday January 9th at approximately 6:41 pm an unidentified individual shattered windows of several businesses in the Pendleton community.

A Fireworks store and The Bedford Bank, both located on HWY 153 in Pendleton, had their windows shattered. Video Surveillance from one of the businesses captured the below image of an individual who is being considered a suspect in the case at this time. In the image the individual can be seen wearing what appears to be a green hooded sweatshirt, gray jogging pants with a white-outlined black stripe running down the outside length of the leg, and light-colored shoes.

Anyone with any information in the case or who may recognize the individual in the photo is encouraged to contact Tpr. Samu with Kentucky State Police Post 5 in Campbellsburg at 502-532-6363. 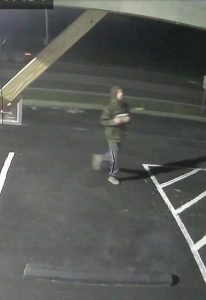 The investigation is continuing by Trooper Will Propes.

The inmates were located