Kentucky State Police detectives began investigating the origin of the items which led them to a residence in Benton, KY.  On November 23, Detectives located and interviewed 58-year-old, Monte L. Beasley.  Beasley was subsequently charged with Possession of Matter Portraying a Sexual Performance by a Minor and Tampering with Physical Evidence.

During their investigation, detectives learned that the Mayfield Police Department was investigating a similar incident in which images of child pornography were located in an abandoned residence earlier in the week.  Detectives determined that those images were found in a home which had been damaged in the December tornado which had previously been occupied by Monte Beasley.  Investigators with the Mayfield Police Department and Kentucky State Police continue to investigate that discovery and expect future charges against Beasley.

Monte Beasley was lodged in the Marshall County Detention Center. 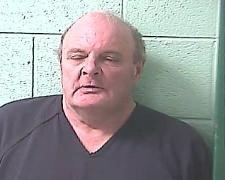