Felicia Bowling believes whole-heartedly that she owes her life to the Kentucky State Police for saving it. 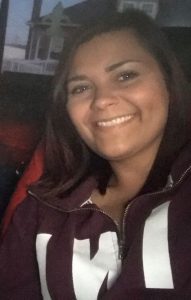 Bowling, 25, says she is the first resident to participate in the Kentucky Sate Police Angel Initiative in Rowan County. The program offers an alternative escape to those battling addiction allowing anyone to can come to any KSP post and receive help finding a treatment center with no questions asked.

Bowling came across the program by chance, reaching out to the Morehead KSP for help with her addiction as a last resort. Bowling said she grew up in an at times troubled family environment.

She described herself as a former IV drug user, mainly using meth and Suboxone.

“I was so miserable I was like begging God to take me, to take my life because I could not do it anymore,” she said.

Desperate, Bowling reached out to the KSP in August. Upon arriving at the KSP post Bowling was escorted by officers to a rehab facility in Harlan County called Lydia’s House. She said she didn’t know what to expect throughout her 30-day treatment, noting she was scared and didn’t want to be away from her 2-year-old daughter for such a long time period.

But her anxieties soon went away and Bowling said through her experience she ended up finding her old self.

“I literally found God again and it changed my life,” she said, adding that she has not used drugs or alcohol since.

Bowling said she is now doing great, noting her daughter has a mother again and that she is now a contributing member of society. She is currently taking on service work and staying busy.

“I can help and give back to my community that I’ve taken so much from because I was a bad person when I was using and I was very selfish and self-centered and now I can give back,” she said. “I’m grateful to be alive and I’m doing good.”

She is also now an advocate for the Angel Initiative, saying she tries to plant the seed about it in her friends and family that currently still use drugs.

Throughout her whole life Bowling said she had perceived law enforcement in a negative light, but has swiftly changed her mindset, now knowing they personally wanted to give her a better life.

“They could have been building a case on me even and I still called and asked for help because that’s what they’re there to do is to help you and it saved my life,” she said.

According to KSP’s website, nine individuals have been placed in treatment through the Angel Initiative. Those wishing to participate can walk into any of the 16 KSP Posts throughout the state or call ahead of time to arrange a meeting.

For more information on the program go to kentuckystatepolice.org/angel-initiative/.