KSP initiated the Cram the Cruiser program in 2010 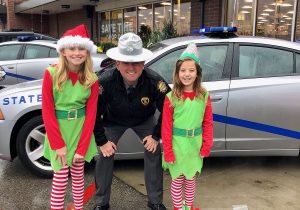 “Due to the generous giving spirit of individuals, businesses, schools and civic organizations throughout the state, we are able to assist Kentucky families who may be financially strapped this holiday season,” said KSP Commissioner Rick Sanders. “I am heartened and uplifted by the incredible acts of charitable service and generosity made by our fellow citizens who make the success of this project possible.”

KSP initiated the Cram the Cruiser program in 2010 to assist needy families in its local post and region areas. Since then, the agency has contributed nearly two million pounds of food to shelters, food banks and churches throughout the Commonwealth.

“Helping those in need is the core of what being a member of the KSP family really is – service to others,” Sanders added.

Over the years, the campaign has developed into a friendly competition among Kentucky State Police posts. This year, KSP Post 7 in Richmond took top honors with a total of 59,279 pounds of food collected.

Capt. Donald Wilson, commander of the post, praised local citizens, businesses, schools and civic organizations for their support of the project.

“We can’t thank them enough,” he said. “Through their combined efforts, they have helped take hunger out of the holidays for many during this special season.”

Wilson also recognized the hard work of Trooper Robert Purdy, public affairs officer for the post, who spearheaded the effort, and is often seen at local grocery stores at collection events in the post area.

“I commend him for all the time, hard work and selfless effort he spent on this program,” Wilson said. “It really made a difference in helping to make the holidays brighter for many families in our post area.”