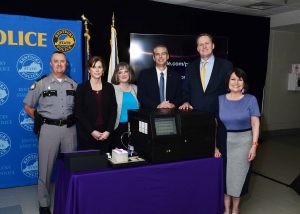 FRANKFORT, Ky.​ (April 10, 2019) – Governor Matt Bevin has announced that Kentucky has become the first state to utilize Rapid DNA for sexual assault investigations. For the last several months, the Commonwealth of Kentucky has implemented and piloted the use of the ANDE Rapid DNA​TM​ system to test samples from Sexual Assault Evidence Kits (SAEKs), also known as Sexual Assault Kits (SAKs). The approach has proven successful, with DNA IDs made and suspects identified within hours of samples being sent to the Kentucky State Police Forensics Laboratories. This dramatic decrease in time to process the kits, which can take months or years using conventional DNA technologies, has led the state to continue and expand Rapid DNA testing of sexual assault cases.

“Today, I am especially proud to announce that Kentucky is leading the nation in addressing one of the most horrible, violent crimes in our country: the crime of rape,” said Governor Matt Bevin. “We have taken a bold step in order to reduce the incidence of this heinous crime. We have evaluated a powerful new technology, Rapid DNA, and determined that it can help us to identify an assailant in a matter of hours – allowing us to focus the investigations of sexual crimes more quickly than ever before.”

The ANDE Rapid DNA Identification System is a new technology that generates a DNA identification from forensic samples in less than two hours. Although the technical steps and data interpretation in the Rapid DNA system are essentially identical to those utilized conventionally, the samples are processed, and the resulting data interpreted automatically. Until now, the lengthy time required to test rape kits has led to laboratory testing backlogs. With this new approach, the lab can generate results quickly, informing investigations by identifying suspects and exonerating the innocent in real time.

“In Kentucky, we believe in justice. Regardless of where you live, or work or play in the state, you should expect to be safe from crimes of sexual assault,” said Justice and Public Safety Cabinet Secretary John Tilley. “Rapid DNA allows us to use DNA immediately for investigating sexual assault cases. It gives us the most powerful witness of all: scientifically proven identity. Kentucky is proud to pioneer this use of Rapid DNA technology. Our goal is to identify suspects and exonerate the innocent to provide justice as soon as possible. Testing sexual assault cases quickly is critical as many rapists are serial offenders — and this can prevent them from committing more crimes.”

Rapid DNA is a scientifically-proven technology that generates a DNA ID (also referred to as a DNA fingerprint). The DNA ID is based on the size of approximately 20 fragments of “junk DNA” and does not reveal information about an individual’s appearance or medical or behavioral conditions. ​This level of privacy removes human bias, delivering objective information to inform investigations.​ ​ANDE is the first and only Rapid DNA system to be granted FBI approval, received for the automated testing and interpretation of cheek swabs.

“Every year, Kentuckians report almost 2,000 sexual assaults – it’s estimated that nearly twice that amount go unreported,” commented Kentucky State Police Commissioner Richard Sanders. “The Commonwealth of Kentucky has evaluated the ANDE Rapid DNA Identification System and we are confident that it will improve our ability to reduce sexual violence in our state. The Kentucky State Police Forensic Laboratories have done a rigorous evaluation of Rapid DNA as a way to accurately identify the rapists without infringing on the privacy of Kentuckians. And, our recent results have proved to us that this will improve safety all over our state.”

About the Kentucky State Police 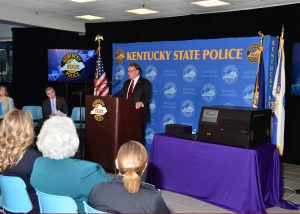 Kentucky State Police has defined itself as a professional, detailed and efficient law enforcement agency dedicated to preserving law and order for the protection of its citizens. The Kentucky State Police strives to maintain the highest standards of excellence utilizing training and technology to create a safe environment for citizens and to continue as a national leader in law enforcement. The Kentucky State Police promotes public safety through service, integrity and professionalism utilizing partnerships to prevent, reduce and deter crime and the fear of crime; enhance highway safety through education and enforcement; and safeguard property and protect individual rights.

ANDE is the global leader in Rapid DNA. With a mission to use Rapid DNA to create a safer world, ANDE’s pioneering work is having major impacts in a wide range of law enforcement, military, and disaster victim identification applications in the U.S. and internationally. ANDE was founded in 2004 and has offices in Waltham, Massachusetts, Longmont, Colorado, and Washington, D.C. For more information about the ANDE Rapid DNA Identification System, please visit ​ANDE.com​. ANDE®​ ​and ANDE RAPID DNATM are registered trademarks of ANDE Corporation.